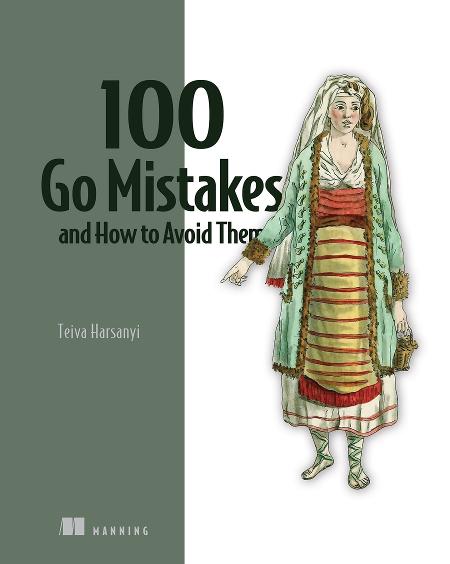 This is an online version of the Manning book 100 Go Mistakes and How to Avoid Them . With liveBook you can access Manning books in-browser — anytime, anywhere.

Thank you for purchasing the MEAP of 100 Go Mistakes and How to Avoid Them.

In 2019, I wrote a blog post called The Top 10 Most Common Mistakes I’ve Seen in Go Projects. This post went pretty popular, and I’ve received much good feedback. From this point onwards, it has started to seed into my mind that perhaps I could make a book about mistakes in Go.

Throughout 2020, I kept collecting ideas and feedback from colleagues, the internet, other books, and, because I have to be fair, mistakes of my own (yes, I made a certain number of mistakes described in this book). At the end of the year, I was convinced I had enough content to start writing about it.

This book collects 100 common mistakes made by Go developers. It tackles all the core aspects of the language: code organization, data and control structures, string, functions and methods, error management, concurrency, testing, optimizations, and production. Each mistake being described explains why this is considered a problem and the different solutions to avoid it.

To read this book, you should have at least a basic understanding of the Go syntax. Then, perhaps you’ve just started learning Go for a couple of months, or you’ve been working with it for years now. In both cases, I’m pretty convinced that you will learn from it. This book’s goal is to help you become a proficient Go developer and help you in your career.