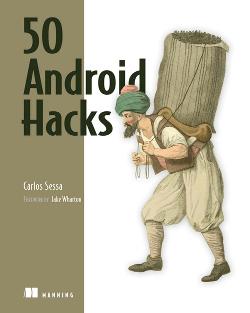 This is an online version of the Manning book 50 Android Hacks. With liveBook you can access Manning books in-browser — anytime, anywhere.

Android is a project with a lot of momentum. The first Android release happened on September 23, 2008, and by the end of 2010 it had become the leading smartphone platform.

Every time there’s a new release, a new set of APIs and possibilities show up. While Android version 1.5 (Donut) only worked in the HTC Dream, right now Android runs in many devices from cellphone to TVs, and on different sizes of tablets and laptops.

This causes two big problems when developing for Android. First, you have to deal with different types of supported devices. While there are lots of ways of dealing with different screen sizes and screen density, you need to create an app that works, and looks great, in every device. Also, targeting every possible Android-powered device might result in different user experiences. The user won’t interact in the same way with a cellphone as with a TV.

The second problem is how long the Android versions stay alive. The story is always the same: with a new Android version, we get new APIs. A new API would be an excellent addition to your app, but as a developer you still need to support older versions, because not everyone will get the update and also because it may take a lot of time to reach your main target audience.

You’ll need to choose if you want to add the new API functionality and release an app just for people using the newest Android version, or go with a hybrid approach where some functionalities are only available in newer versions.