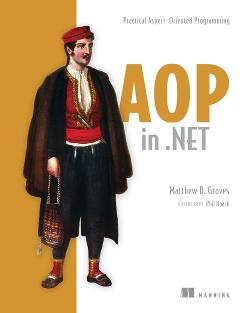 This is an online version of the Manning book AOP in .NET. With liveBook you can access Manning books in-browser — anytime, anywhere.

Aspect-oriented programming (AOP) is a concept that is too often surrounded by dense language and academic terminology, which can make it difficult for a working developer—who is already short on time and struggling to meet deadlines—to understand, apply, and get value from AOP quickly. It’s unfortunate, because at its core, AOP is much less difficult than it sounds and can provide immediate benefits to real-world projects.

My goal has been to write the book that I wish I had read years ago and to show that AOP is much easier done than said. To that end, this book is somewhat informal in tone and short on theory, and it contains lots of code samples, with which I hope you follow along.

As much as I want this book to take a generalized approach to AOP, in order to show you real aspects I have to use real tools. I have chosen PostSharp (specifically, the free version, PostSharp Express edition) as the primary framework that I will be using most often. Castle DynamicProxy examples are also used frequently. I also discuss some of the advanced features of the paid version of PostSharp, and other tools and frameworks will be used and discussed in the course of the book, as well as in appendix A.

Chapter 1 introduces AOP. It covers some of the features and terms that are used in AOP. You will also write a “Hello, World” aspect.