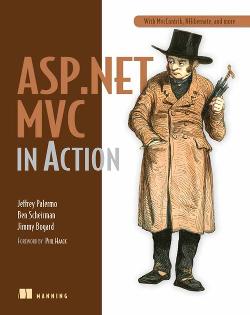 This is an online version of the Manning book ASP.NET MVC in Action with MvcContrib, NHibernate, and More. With liveBook you can access Manning books in-browser — anytime, anywhere.

The ASP.NET MVC Framework was a vision of Scott Guthrie in early 2007. With a prototype demonstration in late 2007 as well as a key hire of Phil Haack as the Senior Program Manager of the feature team, Scott made the vision a reality. At a time when the .NET community was becoming frustrated that other platforms had great MVC frameworks like Tapestry, Rails, and so on, Web Forms was losing favor as developers struggled to make it do things previously unimagined when it became public in 2001. Castle MonoRail was a very capable framework and continues to have strong leadership behind it, but the broader .NET industry needed a change from Web Forms. Phil Haack, with his experience outside of Microsoft as well as in the open source community, immediately came in and led the ASP.NET MVC Framework team to a successful 1.0 release that the .NET community is excited about.

ASP.NET MVC has the benefit of lessons learned from other popular MVC frameworks such as Struts, WebWork, Tapestry, Rails, and MonoRail. It also came about as C# starts to push away its fully statically typed roots. The language enhancements introduced with .NET 3.5 have been fully leveraged in the ASP.NET MVC Framework, giving it a huge advantage over frameworks that came before as well as all the Java frameworks that are tied to the currently supported Java syntax.