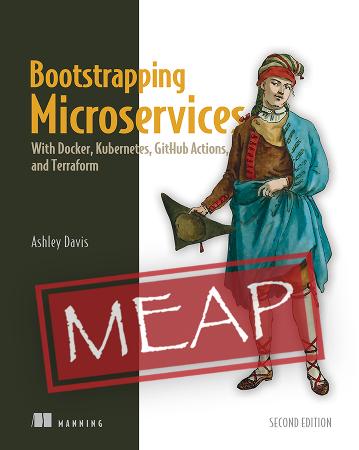 This is an online version of the Manning book Bootstrapping Microservices with Docker, Kubernetes, and Terraform, 2nd . With liveBook you can access Manning books in-browser — anytime, anywhere.

Thank you for joining the MEAP for the second edition Bootstrapping Microservices with Docker, Kubernetes, and Terraform. I’m so happy to be working on this book again for a second round, making it even better and following up on the amazing feedback that we received after the 1st edition.

To get the most from this book it’s best you have some existing skills in one or another programming language. The book has examples in JavaScript, but the code will be simple and if you have previous experience in a different language you shouldn’t have much trouble reading and understanding it.

You might have previous experience developing HTTP servers, but that’s not really necessary. We’ll learn how to make a basic microservice before scaling up to an application composed of multiple microservices.

I started developing microservices applications before I knew about Docker. Docker as a tool for packaging and deploying applications would have been really handy back then. In those days it really was quite difficult to build and deploy microservices and they were far from cost effective – they were expensive to create, to maintain and to run. The build pipeline and getting setup for continuous delivery was especially difficult – back when you had to build most of the tooling for yourself.