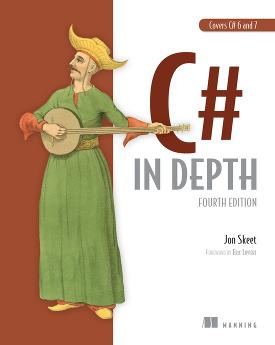 This is an online version of the Manning book C# in Depth, 4th. With liveBook you can access Manning books in-browser — anytime, anywhere.

Ten years is a long stretch of time for a human, and it’s an absolute eternity for a technical book aimed at professional programmers. It was with some astonishment, then, that I realized 10 years have passed since Microsoft shipped C# 3.0 with Visual Studio 2008 and since I read the drafts of the first edition of this book. It has also been 10 years since Jon joined Stack Overflow and quickly became the user with the highest reputation.

C# was already a large, complex language in 2008, and the design and implementation teams haven’t been idle for the last decade. I’m thrilled with how C# has been innovative in meeting the needs of many different developer constituencies, from video games to websites to low-level, highly robust system components. C# takes the best from academic research and marries it to practical techniques for solving real problems. It’s not dogmatic; the C# designers don’t ask “What’s the most object-oriented way to design this feature?” or “What’s the most functional way to design this feature?” but rather “What’s the most pragmatic, safe, and effective way to design this feature?” Jon gets all of that. He doesn’t just explain how the language works; he explains how the whole thing holds together as a unified design and also points out when it doesn’t.