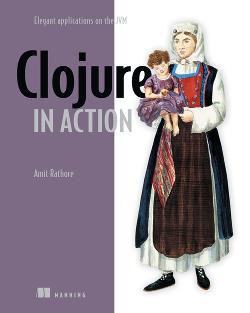 This is an online version of the Manning book Clojure in Action. With liveBook you can access Manning books in-browser — anytime, anywhere.

Programming languages vary a great deal on the productivity spectrum. On the one extreme, we have machine code and assembly language. Then come languages like C, eventually giving way to C++, Java, Scala, and others. On the other side of the spectrum are the functional and dynamic languages. Some of the favorites here include Ruby, Python, Perl, Erlang, Haskell, ML, and others. And these are just a tiny fraction of the landscape—there are dozens of other popular languages, and hundreds more that aren’t in as much use.

With this dizzying alphabet soup of options, how does one choose the right language? Quite rightly, a lot of folks realize that there is no single correct choice, and that it depends on the job at hand. Even so, most people have one general purpose language that they use for most tasks. This book is about a new language called Clojure—one that is a compelling choice for general purpose programming.

The Clojure programming language has been influenced by dozens of languages and has taken the best of many worlds to become what it is today. Clojure is a modern Lisp, and it embraces the functional paradigm. It also runs on the JVM. This makes for a very potent combination. In today’s world, where programmer productivity is paramount, Clojure shines. All else being equal, a good Clojure team can run circles around significantly larger teams using other languages. I’ve seen this in my own startup over the past three years.