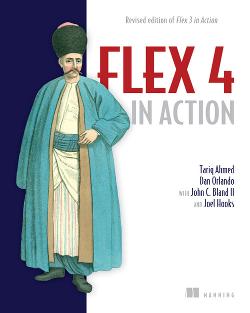 This is an online version of the Manning book Flex 4 in Action. With liveBook you can access Manning books in-browser — anytime, anywhere.

Flex is an event-driven, object-oriented application framework and programming language that lets you build compelling and fluid Rich Internet Applications (RIAs) that run in the Adobe Flash environment.

Historically, the priority in web application development has been feature velocity and time to market, at the cost of usability to the end user. Flex lets you maintain that centrally deployed rapid-turnaround model, but it gives you the power to achieve usability at the same time.

Someone coming into Flex faces unique challenges. First, many developers aren’t used to an event-driven technology. They can understand it at a high level, but don’t truly get it for a long time. Until that happens, you can’t use the technology to its full capability; and, more important, you won’t be able to work as productively.

The second challenge stems from the fact that many developers have been working in their current technology stack for many years. Because people go with what they know, they tend to copy what they did in HTML over into Flex. That will work, but you’re limiting yourself creatively.

The third challenge is the complexity that comes as a result of Flex’s power. It’s not complicated per se, but a lot of web-application technologies are procedural and non-event-driven. The learning curve starts off slowly as you see the basic examples; but the moment you try to go one step further, it suddenly feels a lot harder.