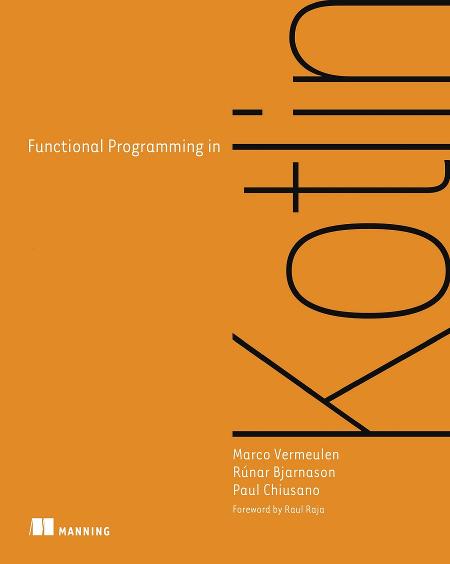 This is an online version of the Manning book Functional Programming with Kotlin MEAP V09. With liveBook you can access Manning books in-browser — anytime, anywhere.

Thanks for joining the early access program of Functional Programming in Kotlin. I hope you have lots of fun as you join me in working through this exciting, yet challenging book.

Why is it a challenging book? This book is a port of Manning’s Functional Programming in Scala into Kotlin. The original (known as “the Red Book”) has a huge following and is revered by many as the authoritative text about functional programming (FP) in the Scala community. In fact, the Red Book is less about Scala than what it is about good FP techniques and principles. It teaches functional programming from first principles, regardless of language.

Why is this book exciting? Kotlin is the new kid on the block, and many see it as their new language of choice on the JVM. Kotlin is gaining in popularity among backend developers, and not just with mobile (Android) developers. Kotlin also has a remarkable number of similarities to Scala; like Scala, it falls into the category of a general-purpose object functional language.

As a result of the increasing popularity of both FP and Kotlin, I decided to bring these two worlds together. Not much has been written about FP in Kotlin so far. This is the perfect opportunity to bring the success of Functional Programming in Scala to all the Kotlin developers who would love to learn functional programming.