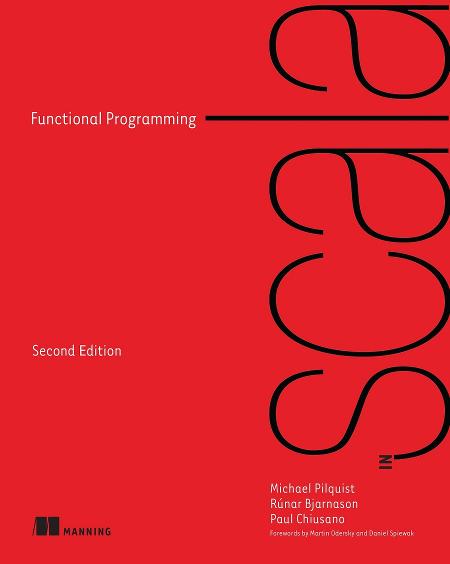 This is an online version of the Manning book Functional Programming in Scala, 2nd . With liveBook you can access Manning books in-browser — anytime, anywhere.

Thank you for purchasing the MEAP for Functional Programming in Scala, Second Edition.

The first edition was published in 2014 and quickly became regarded as a classic text in functional programming. It's been used by university courses and by study groups, by hobbyists and the by world's largest companies, and has been translated to different languages. The first edition also had a reputation for being very difficult, with many readers getting stuck on some of the exercises.

A lot has changed in Scala since 2014. At the time of publication, Scala 2.10 had been recently released and the Scala FP ecosystem was in its infancy. Major open source projects like Doobie (http://github.com/tpolecat/doobie) and http4s (http://http4s.org) were just getting started, the Cats (http://typelevel.org/cats/) library didn't yet exist, and FS2 (https://github.com/typelevel/fs2), which grew out of the code presented in chapter 15, was just published. Interoperability between libraries was cumbersome and the Scala language had some key limitations that made FP less accessible than it could be.