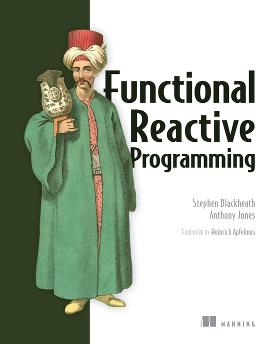 This is an online version of the Manning book Functional Reactive Programming. With liveBook you can access Manning books in-browser — anytime, anywhere.

Functional programming (FP) holds real solutions to today’s complex software needs, especially the challenges of parallelism. It’s catching on, but there are barriers to its adoption. FRP is a subset of FP that doesn’t require you to learn a new language. This makes FRP an ideal gateway drug to functional programming. FRP solves a specific problem now, yet it gives you grounding in ideas that have wide application.

Lambda expressions have now been added to every language. The only thing standing in the way of wide adoption of FRP is gone. FRP is essentially an embedded logic language, so code written in it looks basically the same in any language. It turns out that Java has especially clear FRP syntax, and this was why we chose it as the primary vehicle in this book, but the language really doesn’t matter.

There’s a need for FRP, the languages are ready, and functional programming is in vogue. The time is right for FRP to take over a small corner of the world.

Chapter 1, “Stop listening!” introduces the what and why of FRP and finishes with a simple example.

Chapter 2, “Core FRP,” covers all the basics of FRP and includes a minimal example for each element except the switch and sample primitives (covered in chapter 7) and operational primitives (chapter 8). In chapter 3, “Some everyday widget stuff,” the examples become more practical.