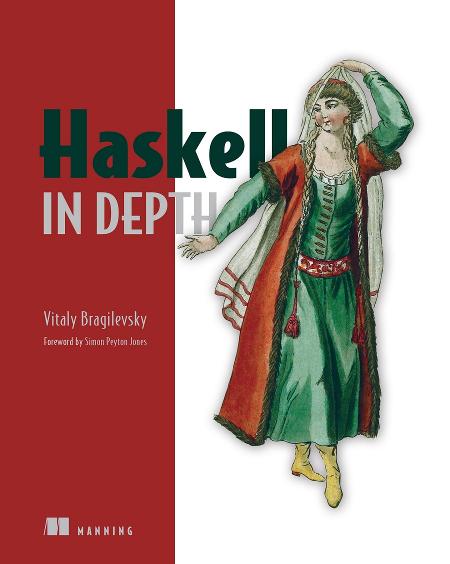 This is an online version of the Manning book Haskell in Depth MEAP V13. With liveBook you can access Manning books in-browser — anytime, anywhere.

Thank you for purchasing the MEAP for Haskell in Depth. I’m excited to see the book reach this stage and look forward to its continued development and eventual release. This is a book for those of you who already know and like Haskell and want to start using Haskell in production.

I tried not repeat things that you are aware of or can find in other books that have been published already. Nevertheless, there is always a tradeoff when deciding whether to include material in a book. As this is a work in progress, things may change significantly.

We’re releasing the first three chapters with a small technical introduction on how to work with the code examples to start. I truly believe that it is impossible to learn programming at any level by reading. I recommend that you work with the examples on your own, extending or completely rewriting them. I will occasionally suggest possible directions in which to take your work.

Chapter 1 is an attempt to give a short overview of the current state of Haskell and programming in Haskell, what its ecosystem consists of. As this is a book in Manning’s in Depth series, there is no need to introduce you to the basic concepts of Haskell programming, but you may not be aware of some of the available options, so it’s worth reviewing the programming style that is supported in Haskell.