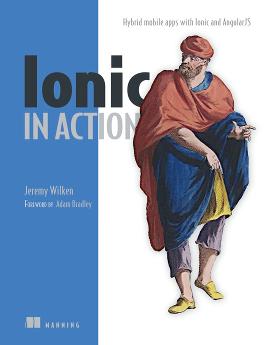 This is an online version of the Manning book Ionic in Action. With liveBook you can access Manning books in-browser — anytime, anywhere.

Ionic brings together several existing projects with its own set of tools so web developers can build mobile apps. Ionic has gained a strong following and is a top choice for mobile app developers.

Ionic in Action is a hands-on, example-driven guide to Ionic. During the course of the book, you’ll build several nearly complete apps that showcase almost every feature of Ionic. The documentation for Ionic is very good, but it doesn’t provide much direction on how to orchestrate a large app.

When you build an app with Ionic, you actually use a combination of technologies (primarily Angular and Cordova). To ensure you’re really capable of building mobile apps with Ionic, the book provides chapters on those technologies. There’s much more that could be said about Angular and Cordova, which is why entire books have been written about them, but this book tries to do them justice and provides enough foundational knowledge to get you started.

Mobile apps often require access to external data. It’s helpful to understand how APIs are able to provide data for web applications. Ionic in Action covers how to utilize RESTful APIs through several of the examples.

This book is intended for web developers who have a foundation in building web applications.

How the book is organized