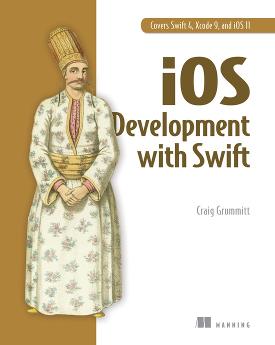 This is an online version of the Manning book iOS Development with Swift. With liveBook you can access Manning books in-browser — anytime, anywhere.

In this book, we’ll look at building native iOS apps using Swift. iOS is the operating system launched 10 years ago (how time flies!) by Apple for their range of “i” products: iPhones, iPads, and iPod Touches. A native iOS app can take advantage of Apple’s built-in user interface frameworks to present a UI that looks and acts consistently with what users are accustomed to in iOS apps.

To build iOS apps in iOS 11, you’ll use the current version of Apple’s powerful development software, Xcode 9. Because Xcode comes directly from Apple, you can be confident that apps you build will be native, and the tools and frameworks will be up to date. Developers new to Xcode should be sure to read the first chapter to familiarize themselves with it.

You’ll also be programming in Swift 4. This book dedicates two chapters to get you up to speed on Swift, and you’ll find other Swift tidbits where relevant throughout the book. Of course, if you already have experience in Swift, feel free to skip or skim these chapters.

You’ll also learn how to work with data: how to pull data down from a web service, how to deal with data in your code, and how to store data on the device and in the iCloud. We’ll look at how to then display data within the app.