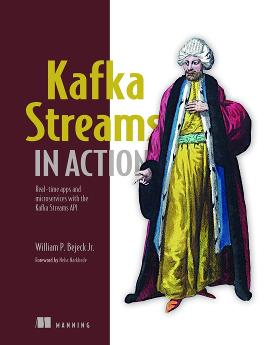 This is an online version of the Manning book Kafka Streams in Action. With liveBook you can access Manning books in-browser — anytime, anywhere.

I wrote Kafka Streams in Action to teach you how to get started with Kafka Streams and, to a lesser extent, how to work with stream processing in general. My approach to writing this book is a pair-programming perspective; I imagine myself sitting next to you as you write the code and learn the API. You’ll start by building a simple application, and you’ll layer on more features as you go deeper into Kafka Streams. You’ll learn about testing and monitoring and, finally, wrap things up by developing an advanced Kafka Streams application.

Kafka Streams in Action is for any developer wishing to get into stream processing. While not strictly required, knowledge of distributed programming will be helpful in understanding Kafka and Kafka Streams. Knowledge of Kafka itself is useful but not required; I’ll teach you what you need to know. Experienced Kafka developers, as well as those new to Kafka, will learn how to develop compelling stream-processing applications with Kafka Streams. Intermediate-to-advanced Java developers who are familiar with topics like serialization will learn how to use their skills to build a Kafka Streams application. The book’s source code is written in Java 8 and makes extensive use of Java 8 lambda syntax, so experience with lambdas (even from another language) will be helpful.