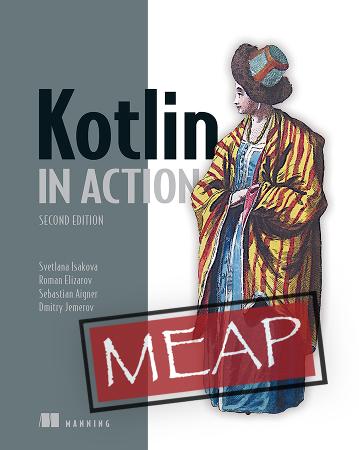 This is an online version of the Manning book Kotlin in Action, 2nd . With liveBook you can access Manning books in-browser — anytime, anywhere.

Thank you for purchasing the MEAP edition of Kotlin in Action, Second Edition. We hope that you’ll find this content useful and help us make the final version even better!

Since the first edition of Kotlin in Action, Kotlin has evolved a lot. Not only the language but the whole ecosystem around it has changed. Kotlin has received many updates, new features, and paradigms, as well as new library functionality. The whole topic of coroutines wasn’t even a thing when we were working on the first edition, and now they’re the default way to write asynchronous and concurrent code in Kotlin. Many new libraries and frameworks have appeared, and many existing ones have added support for the language.

With the second edition of Kotlin in Action, we want to continue to give experienced developers a comprehensive introduction to the language. We’re updating it with the latest features, including concurrency paradigms with coroutines, something that has been heavily requested by the community.