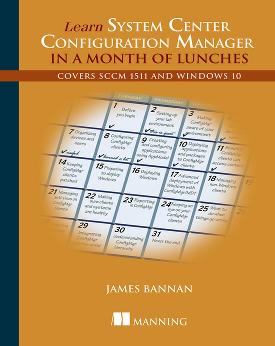 This is an online version of the Manning book Learn System Center Configuration Manager in a Month of Lunches. With liveBook you can access Manning books in-browser — anytime, anywhere.

Chapter 1 covers most of what you’ll need to know about this book, but there are a few extra points worth covering ahead of time.

While there are a couple of chapters that are theoretical in nature, the majority of content in the book is designed to be hands-on. To this end, chapter 2 covers setting up a fully functional, self-contained lab environment. I strongly recommend that you take the time to get your lab up and running, as the content makes much more sense if you’re implementing it in a live environment. If you don’t have a system with enough resources to run the lab environment, ask your boss nicely!

The content is designed to be consumed in order, as the labs in each chapter are built on those in the previous chapters. You might be really interested in application deployment, but resist the temptation to jump straight to that chapter (or any other chapter), as the labs are likely not to work if you haven’t completed the foundation tasks.