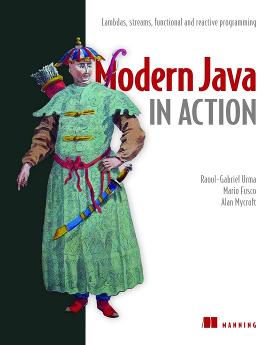 This is an online version of the Manning book Modern Java in Action. With liveBook you can access Manning books in-browser — anytime, anywhere.

Put simply, the new features in Java 8 along with the (less-obvious) changes in Java 9 are the biggest change to Java in the 21 years since Java 1.0 was released. Nothing has been taken away, so all your existing Java code continues to work—but the new features provide powerful new idioms and design patterns to help you write clearer, more concise code. At first you might think (as with all new features), “Why are they changing my language again?” But then, after a bit of practice, comes the revelation that you’ve just used the features to write shorter, clearer code in half the time you expected—and you realize you could never go back to “old Java” again.

The second edition of this book, Modern Java in Action: Lambdas, Streams, Functional and Reactive Programming, is written to get you over that initial hump of “sounds good in principle, but it’s all a bit new and unfamiliar” and into coding like a native.

“Perhaps,” you might think, “but lambdas, functional programming—aren’t those the sort of things that bearded sandal-wearing academics talk about in their ivory towers?” They might be, but Java 8 has incorporated just the right balance of ideas into Java to gain many of their advantages in a way that’s comprehensible to ordinary Java programmers. And this book tells the story from the ordinary-programmer viewpoint, with an occasional “how this arose” for perspective.