Appendix B. Real-time rendering with OpenGL

The names resemble each other, but OpenCL and OpenGL serve very different purposes. While OpenCL is used for general computation, OpenGL (Open Graphics Language) is concerned with rendering 3-D graphics. By rendering, I mean that OpenGL accepts a model composed of three-dimensional figures and produces a two-dimensional array of pixels that can be drawn in a window. This rendering executes in a loop, and if the properties of the figures change, the renderer will update the drawing. Figure B.1 provides an example of a static rendering.

Figure B.1. A simple OpenGL rendering 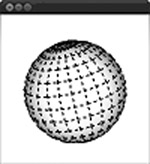 All the pixels in this figure have colors, but it would be tedious to set each color separately. Instead, the application defines three-dimensional points, called vertices, and routines to be invoked during the rendering, called shaders. As the application runs, the shaders process the vertices and draw the pixels in the window.

B.2. OpenGL development on the host

B.4. Creating the OpenGL window with GLUT

B.5. Combining OpenGL and GLUT