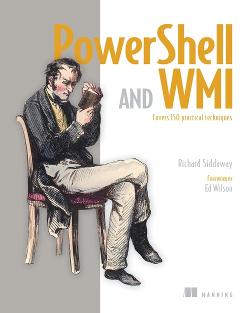 This is an online version of the Manning book PowerShell and WMI. With liveBook you can access Manning books in-browser — anytime, anywhere.

This is a book for system administrators, those who manage administrators, those responsible for auditing systems, and anyone else who needs to discover information about Windows-based systems. PowerShell and WMI are powerful individually, but when they come together they supply an unrivalled way to access and administer your systems.

I have attempted to show the breadth of problems that PowerShell and WMI can solve. The depth of these technologies is also exposed by the detailed and practical examples. There are areas such as clustering and the System Center family that haven’t been touched because of space considerations.

This book was written during the PowerShell v3 development and beta program. Except where otherwise stated, this book deals with PowerShell v2. Chapters 18 and 19 require PowerShell v3 as they use functionality only available in that version.

Most of the code will also run on PowerShell 1.0, and I will point out where this is not the case and what alternatives are available.

This book isn’t a pure cookbook of PowerShell-based scripts nor is it a book on Windows administration. It lies between these two points and provides insight into how to automate the administration of your Windows systems using PowerShell and WMI.