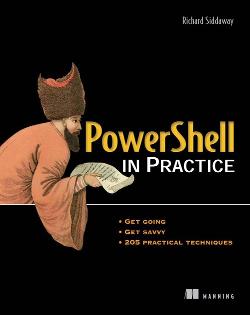 This is an online version of the Manning book PowerShell in Practice. With liveBook you can access Manning books in-browser — anytime, anywhere.

This is a PowerShell book for administrators. It’ll show you how to use PowerShell v1, PowerShell v2, and the PowerShell functionality introduced with products such as SQL Server, Exchange, and Windows Server 2008 R2. Third-party additions will also be used where appropriate. We’ll see problems solved using scripts in version 1 with reference to cmdlets that were introduced in version 2. This is a deliberate decision to ensure that the book has the widest possible scope. PowerShell v1 isn’t going to disappear overnight and we need to be able to work across both versions in the near future.

When you read the book, it’ll seem to be a hybrid. It lies somewhere between a cookbook of PowerShell recipes and an explanation of how to administer Windows-based systems. That’s deliberate in that I believe you can’t properly apply the automation techniques you’ll gain from the book unless the underlying technologies are understood. The book is a PowerShell book, so the explanations aren’t complete—just enough to explain why we’re performing a specific task.