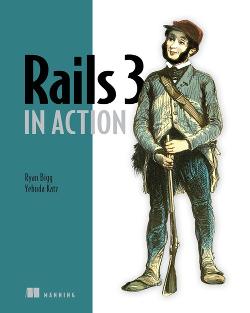 This is an online version of the Manning book Rails 3 in Action. With liveBook you can access Manning books in-browser — anytime, anywhere.

Ruby on Rails is a leading web application framework built on top of the fantastic Ruby programming language. Both the language and the framework place an extreme emphasis on having a principle of least surprise and getting out of the way of the developers using it.

Ruby on Rails has been growing at a rapid pace, with large internet companies such as Yellow Pages and Groupon using it for their core functionality. With the latest release of Rails, version 3.1, comes a set of changes that improve the already brilliant framework that has been constructed over the past seven years. The fantastic community around the framework has also been growing at a similar pace.

This book is designed to take you through developing a full-featured Rails application from step one, showing you exactly how professionals in the real world are developing applications right now.

This book is primarily for those who are looking to begin working with the Ruby on Rails framework and who have some prior experience with Ruby, although that is not entirely necessary.

Later chapters, such as chapter 13, “Designing an API,” chapter 17, “Engines,” and chapter 18, “Rack-based applications,” delve into more advanced topics, so these chapters are suitable for people who already have a foundation with Rails and are looking to expand their skillset a little further.