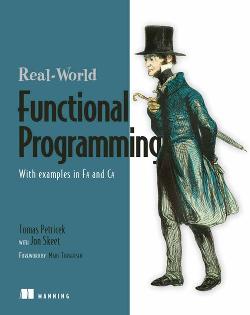 This is an online version of the Manning book Real-World Functional Programming with Examples in F# and C#. With liveBook you can access Manning books in-browser — anytime, anywhere.

If you are an existing .NET developer who knows object-oriented technologies and are wondering what this new “functional programming” movement is about and how you can benefit from it, this book is definitely for you.

If you’re an existing object-oriented programmer using other languages and tools (for example, Java, Python, or Ruby) with the ability to understand languages quickly, you can also benefit from this book. We’re using examples in C#, but many of them would look similar in other object-oriented languages. The C# 3.0 features that aren’t available in other languages are briefly explained, so you don’t have to worry about getting lost.

This book doesn’t focus on academic aspects of functional programming, but if you’re a computer science student taking a course on the topic, you can read this book to learn about the real-world uses of functional concepts.

What will this book give you?

What won’t this book give you?