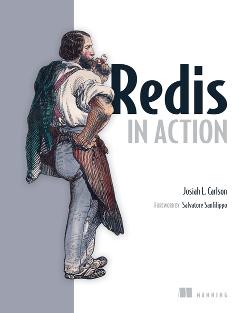 This is an online version of the Manning book Redis in Action. With liveBook you can access Manning books in-browser — anytime, anywhere.

This book covers the use of Redis, an in-memory database/data structure server, originally written by Salvatore Sanfilippo, but recently patched through the open source process. Though you don’t necessarily need to know anything about Redis, to get the most out of this book you should have at least a modest familiarity with the Python programming language, since almost all of the examples use Python to interact with Redis.

You can learn enough about Python by going through the Python language tutorial for Python 2.7.x and reading the Python documentation for certain syntactical constructs when I mention them. Though source code listings will be translated to Java, JavaScript, and Ruby in time, they may not be as clear or concise as the code already listed. And they may not even be available in time for the print edition of Redis in Action.

If you don’t already have experience with Redis, you should at least read chapters 1 and 2 before reading any other chapter (except for appendix A, which includes the basic installation instructions). The first couple chapters will give you an idea of what Redis is, what it does, and why you might want to use it. From there, chapter 3 is an introduction to what each structure can do and the general concepts around them, and chapter 4 is about Redis administration and making choices about data persistence.