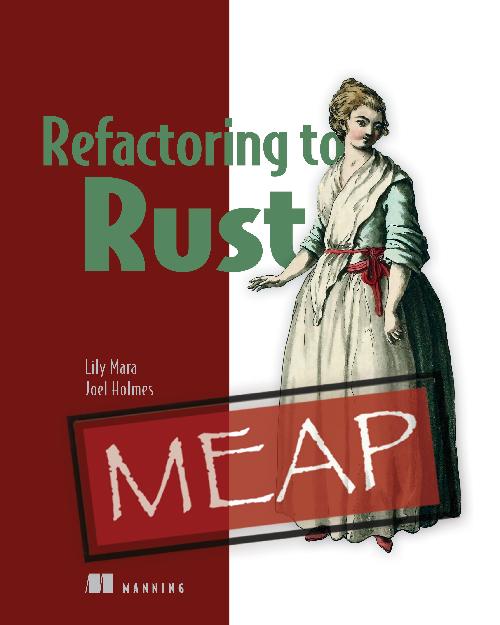 This is an online version of the Manning book Refactoring to Rust . With liveBook you can access Manning books in-browser — anytime, anywhere.

Thank you for purchasing the MEAP for Refactoring to Rust!

Rust is one of the most exciting new languages out there. Consistently rated as the “most loved” language by the Stack Overflow developer survey, many developers wonder what about Rust makes its users so happy. In our development jobs, it can be difficult to get management buy-in to start up a new service around a language that may never have been used at the company before. Instead, replacing a small part of performance-critical code with Rust might be a more effective first project. This book intends to give you the tools and skills required to make a surgical refactoring like this possible.

The chapters in this book will take you through the areas where Rust differs the most from other languages, introduce you to embedding Rust within a C program, using the Py03 library to embed Rust in Python, as well as testing, profiling, and monitoring your refactored code to ensure that it’s performing within expectations. Refactoring to Rust is intended for developers that have some familiarity with Rust already.

I hope you can benefit from the instruction in this book, and it helps you on your journey to writing faster, safer, and simpler code. I also encourage you to post any questions or comments in the liveBook Discussion forums. Just like software development writing is an iterative, collaborative process, and you as the MEAP reader are an important part of that process.