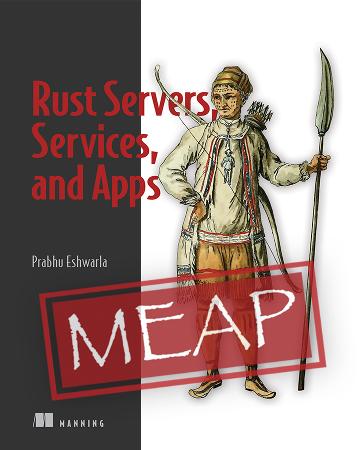 This is an online version of the Manning book Rust Servers, Services, and Apps . With liveBook you can access Manning books in-browser — anytime, anywhere.

Thank you for purchasing the MEAP edition of Rust Servers, Services, and Apps.

Rust is a hot topic right now. It has been named most loved programming language in developer surveys for five consecutive years, and interest is growing among software developers and engineers alike, from both ends of the spectrum: low-level system programmers and higher-level application developers all want to explore and learn Rust. That said, one question that gets asked frequently is whether Rust is really suitable and ready for the web. Most of the learning material available in this space is really introductory in nature, and doesn’t provide a view into how Rust can handle more complex scenarios encountered in web development. In this book, I aim to show you how Rust, in spite of its reputation for being a systems programming language, is really a surprisingly delightful language to build web applications in.