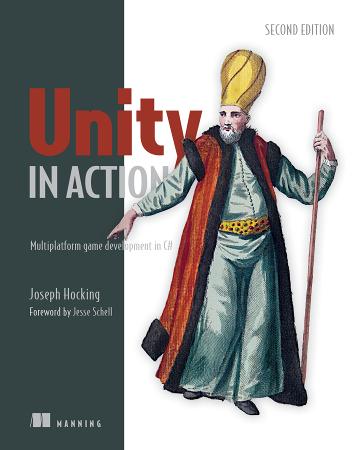 This is an online version of the Manning book Unity in Action. With liveBook you can access Manning books in-browser — anytime, anywhere.

Unity in Action, Second Edition is a book about programming games in Unity. Think of it as an intro to Unity for experienced programmers. The goal of this book is straightforward: to take people who have some programming experience but no experience with Unity and teach them how to develop a game using Unity.

The best way of teaching development is through example projects, with students learning by doing, and that’s the approach this book takes. I’ll present topics as steps toward building sample games, and you’ll be encouraged to build these games in Unity while exploring the book. We’ll go through a selection of different projects every few chapters, rather than one monolithic project developed over the entire book. (Sometimes other books take the “one monolithic project” approach, but that can make it hard to jump into the middle if the early chapters aren’t relevant to you.)

This book will have more rigorous programming content than most Unity books (especially beginners’ books). Unity is often portrayed as a list of features with no programming required, which is a misleading view that won’t teach people what they need to know in order to produce commercial titles. If you don’t already know how to program a computer, I suggest going to a resource like Codecademy first (the computer programming lessons at Khan Academy work well, too) and then come back to this book after learning how to program.