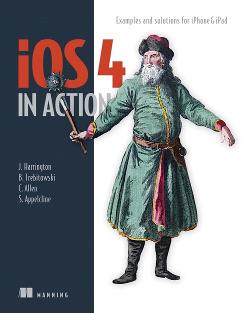 This is an online version of the Manning book iOS 4 in Action. With liveBook you can access Manning books in-browser — anytime, anywhere.

iOS 4 in Action is an introductory book, intended to teach the basics of iOS development in a tutorial form. It’s an update of iPhone in Action, which first appeared in 2008, and iPhone and iPad in Action which appeared in 2010. We encourage you to read this book straight through, from chapter 1 to 22. This will introduce the platform, show you how to program for the iPhone and iPad, and walk you through the entire process step by step.

We’ve done our best to make this book accessible to everyone who is interested in writing native programs for the iPhone and iPad. We hope it will be especially useful to people who are looking to dive into the iPhone/iPad arena, because it allows you to create native applications for all of Apple’s iDevices.

If you want to learn about iOS programming, you should have some experience with programming in general. It’d be best if you’ve worked with C or at least one object-oriented language before, but that’s not a necessity; if you haven’t, you can read our introduction to Objective-C in chapter 2, and you should expect to do some research on your own to clarify things. There’s no need to be familiar with Objective-C, Cocoa, or Apple programming in general. We’ll give you everything you need to become familiar with Apple’s unique programming style. You’ll probably have a legup if you understand object-oriented concepts; but it’s not necessary (and again, you’ll find an introduction in chapter 2).