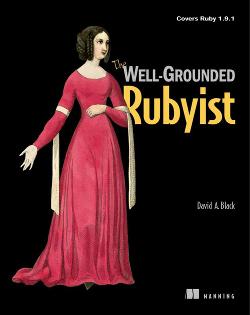 This is an online version of the Manning book The Well-Grounded Rubyist. With liveBook you can access Manning books in-browser — anytime, anywhere.

...to The Well-Grounded Rubyist. This book is a reworking of my book Ruby for Rails (Manning, 2006) and builds on the Ruby language explication present in that book so that a broader audience of Ruby learners can make use of it and learn from it.

Ruby is a general-purpose, object-oriented, interpreted programming language designed and written by Yukihiro Matsumoto (known widely as “Matz”). It was introduced in 1994 and became popular in Japan during the 1990s. It’s known and admired for its expressiveness—its ability to do a lot with relatively little code—and the elegance and visual smoothness of its syntax and style. Ruby has proven useful and productive in a wide variety of programming contexts, ranging from administrative scripting to device embedding, from web development to PDF document processing. Moreover, and at the risk of sounding non-technical, Ruby programming is fun. It’s designed that way. As Matz has said, Ruby is optimized for the programmer experience. Indeed, Ruby started as Matz’s pet project and gained attention and traction because so many other programmers got pleasure from the same kind of language design that Matz did.